And Other Questions You May Have Asked About the Jeffrey Epstein Case:

There was a time when Jeffrey Epstein was known for his lavish wealth and his famous friends.

But today, Epstein has a very different public persona. He’s become one of the most famous sex traffickers and pedophiles in history. Although Epstein has been dead for nearly a year, his case is anything but over. The recent arrest of his accomplice Ghislaine Maxwell has left people with even more questions about how deep Epstein’s crimes went and who all was involved. Inquiries like “Will the victims get justice?’ and “Did Ghislaine Maxwell commit suicide?” are just a couple of examples.

Why Was Jeffrey Epstein So Famous?

Many years before Epstein’s crimes were public knowledge, there were a lot of questions about his lifestyle. One major source of confusion was how exactly Epstein had made such a sizable fortune. Although Epstein said he was a money manager for some of the richest in the world, things didn’t quite add up.

Epstein had numerous homes, including one in Palm Springs, one in New York, one in New Mexico, one in Paris, and, most notably, one on Little St. James Island. He surrounded himself with powerful, wealthy individuals like Bill Clinton, Donald Trump, Prince Andrew, and Harvey Weinstein.

What Crimes Did Jeffrey Epstein Commit?

When Epstein wasn’t around filthy-rich celebs, he was around young, gorgeous women. Behind the scenes, Epstein was a pedophile with many victims. Although it’s unclear when this Epstein started abusing women and young girls, the first formal complaint against him came in 1996.

An artist named Maria Farmer reported the sexual abuse she and her younger sister had suffered at the hands of Epstein and Maxwell to the FBI and the NYPD, but seemingly no action was taken. The story should have made its way into Vanity Fair magazine in 2002 when reporter Vicky Ward did a profile on Epstein. She got word of the Farmer women’s complaints and interviewed both of them. But her editors had been bought off, and the magazine refused to publish the allegations in the story.

In 2005, The Palm Beach Police Department began investigating Epstein after multiple young girls came forward recounting their experiences with Epstein. Many girls had almost identical experiences with Epstein. Their relationships with him often began when he requested they give him massages for compensation. Not only did Epstein pay the girls he was abusing, but he also paid for the girls to recruit other girls to his home. Essentially, he had created a pyramid scheme that revolved around molestation.

The abuse didn’t stop with Epstein. He trafficked the girls out to others. When you consider all of Epstein’s powerful friends, there’s no telling who was involved.

The multi-year investigation into these allegations climaxed in 2007 when Epstein was arrested for the first time. He pled guilty the following year to a single felony charge for soliciting a prostitute who was a minor. Because of an unheard-of, bizarre plea deal, Epstein was only sentenced to 18 months in a county jail.

Even Epstein’s jail experience was anything but ordinary. He was in the private wing of the jail and was able to meet extensively with his lawyers. He was allowed to leave the jail for 12 hours a day, 6 days a week on work release.

After serving a mere 13 months, Epstein was released. From that time on, he was a registered sex offender.

The system ignoring the despicable acts done by Epstein is by no means unheard of. For example, a story broke a few years ago in the U.K., revealing that government security services knew about the abuse happening at the Kincora Boys’ Home but reportedly didn’t stop it. Instead, they used the abuse as leverage to gather intelligence from powerful figures and politicians. Who’s to say a similar situation wasn’t behind Epstein’s plea deal?

The island was highly secure. Epstein’s powerful friends like Bill Clinton and Alan Dershowitz would visit him on the island. It was there that Epstein’s victims suffered even more horrific abuse for years.

When Was Jeffrey Epstein Arrested for Sex Trafficking?

In July 2019, it seemed like Epstein’s victims might finally get justice when he was arrested in New Jersey. Epstein was charged with sex trafficking and faced up to 45 years in prison. After the arrest, even more women spoke out to reveal they too had been abused by Epstein. Despite the mounting evidence against him, Epstein denied the charges by saying that all his sexual encounters had been consensual and that he’d been under the impression that all the girls were at least 18.

Things took a more interesting turn just one month after his arrest when Epstein was found dead in his Manhattan jail cell. Although the New York City medical examiner ruled his death a suicide, this only brought up more suspicion and more questions. The guards had been sleeping. Nothing was caught on camera. In a highly secure correctional facility, how could such an oversight occur? Once again, it appeared that Epstein’s power ran deeper than justice.

How are Ghislaine Maxwell and Jeffrey Epstein Related?

The next major development came in July 2020 when Ghislaine Maxwell was arrested. Maxwell had been by Epstein’s side since the 90s. They dated at some point, but how they labeled their relationship is unclear. Regardless of how Ghislaine Maxwell and Jeffrey Epstein are related to each other, she was responsible for recruiting and often training the girls. If Epstein was running a pyramid scheme, Maxwell was at the very top.

After his body was found, Epstein’s death became a sort of punchline. There were numerous memes and social media posts joking about how Epstein was murdered. The truth is: there’s nothing funny about Epstein’s death and possible murder. The effects on Epstein’s victims are serious.

It’s very clear that the justice system failed Epstein’s victims. He should have been stopped many years ago. His untimely passing is yet another failure because it may have prevented more of his accomplices from being named.

Even as adults, Epstein’s victims are still haunted today by what happened to them. The effects of human trafficking are very real. Epstein’s victims were trapped in every sense of the word. Some of them were physically trapped on the island. For many, the work they were doing for Epstein was their only source of income and they saw no way out. Many became depressed and even suicidal.

So where is Ghislaine Maxwell now? Still alive—so far. And it’s vital she stays that way. What happened to Epstein can’t happen to Ghislaine Maxwell. She must be protected so she can name others who are associated with Epstein’s molestation scheme. 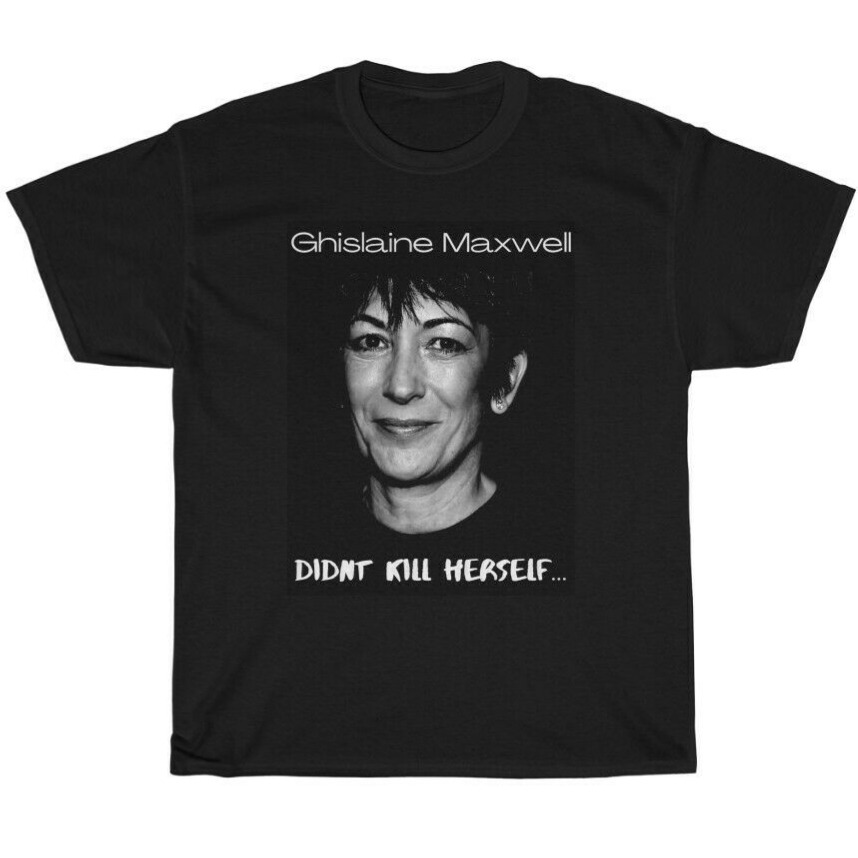 The victims of Epstein and Maxwell are still awaiting justice. They deserve that much after all they’ve been through. People must be aware of what’s going on with the Epstein case and realize that justice has still not been served. They must demand it. No amount of money or power should make people above the law.

Want to get the word out? One simple way you can is by buying one of our t-shirts and wearing it when you’re with others. It will definitely spark some interesting conversations. The more people that are aware of the situation, the more people there will be to demand justice. And when more people are demanding justice, hopefully, Ghislaine Maxwell won’t be able to kill herself.

Our t-shirts can help spur on conversations about where Ghislaine Maxwell is now. They shed light on the heinous reality of sex trafficking. Buying a shirt is such a simple but meaningful thing you can do to make a difference.

Buy your “Did Ghislaine Maxwell commit suicide?” shirt to make sure it doesn’t happen and trigger real change!